Tomio Koyama Gallery is pleased to present the solo exhibition of artist Keiji Ito, who at 86 years of age continues to actively traverse different genres to produce an eclectic oeuvre that includes ceramic three-dimensional works and paintings.

The exhibition marks the artist’s first solo presentation at the gallery, and features new ceramic three-dimensional works, a selection of recent oil paintings that are the source of the artist’s creations, and thread-on-cloth collages specially created for this occasion.

【About Keiji Ito and his Works: His Natural Stance of Freely Traversing Ceramics, Sculpture, Painting, Craft, and Art】

The sense of free-mindedness unbound by existing frameworks that permeates Ito’s work, is also strongly reflected in the artist’s background and interests. Keiji Ito (1935-) was born in Toki, Gifu Prefecture. Ito grew up in Mino that is home to a thriving ceramic industry, and whose potteries had undergone major reform in the Azuchi-Momoyama period. With much pride and respect for this region, he currently continues live and work in Mino where both his home and workshop are located.

Ito entered Musashino Art University in 1954, where he studied oil painting under Yoshio Mori, Saburo Aso, and Takeo Yamaguchi. In his student days he had been attracted to the works of Modigliani, Picasso, Klee, Kandinsky, as well as the giant boulder structures in the Asuka region of Nara Prefecture, the Asuka Daibutsu (a giant statue of Buddha), and the Buddhist statues that stand in the halls of Yakushiji temple.

Upon graduating university he joined the design department of the Gifu Prefectural Ceramics Research Institute, where he was greatly influenced by Sakuzo Hinone, who was a leading figure in Japan’s crafts movement. While at first solely engaging in two-dimensional design work, he eventually also began to produce ceramics himself due to realizing the limitations of the connection between designing on a flat surface and with the actual three-dimensional works for which they were intended. Ever since, in addition to everyday vessels, tea ware, and crafts, he has produced three-dimensional forms such as “ceramic sculptures” and “installations” which from early on have combined other materials like iron. As a major driving force in contemporary Mino ceramics, Ito continues to pave the way for many young artists.

Furthermore, since 70 years old he has set up a painting studio in his home asides from his workshop. This also created a significant opportunity for him to purely enjoy painting, as well as develop his thorough knowledge of eastern and western art that he had acquired in his late teens and early twenties, into a new world of work.

Ito’s oeuvre, which traverses between different genres with sheer lightness and finesse, is not so much a result of his strong intentions of doing so, but is largely characterized by his natural stance of freely engaging with his interests. Ito himself states as follows.

“I had been conscious of there being two pillars: things that are intended for use, and things that are close to art. (…) For me, it’s more or less the sense that the act of painting on canvas as I had done so when I was young, had simply changed to working with soil. I don’t particularly think that there is a significant difference between the two.”

“I feel that even among things that have a function, there are those that are very close to art. For example, even a bowl could become a work of art if a lid was placed on it. I myself am not conscious of such distinctions and classifications.”

【About the New Works in the Exhibition: Questioning Human Existence and the Distinct Nature of Ceramics Conveyed through a Variety of Expressions】


Such as “Man,” “Woman,” “Face,” “Embrace,” and “Crouching,” introduced in this exhibition are a series of new three-dimensional ceramic works that convey fundamental human figures and their various movements and gestures, the titles and themes of which are also connected to the paintings and collage works on exhibit.

August yet aloof, and dignified while somewhat giving rise to an air of humor, the works permeate with a unique atmosphere that enables one to feel tension and warmth at the same time.

Ito began producing the “Face” series, which could be described as the root of this group of works, in 2008. Those who had long been familiar with Ito’s work could not hide their surprise in the changes of his artistic style, illustrating an apparent shift from the taciturn and abstruse impression of his previous works such as “Prayer” and the “HIROSHIMA” series.

2008 incidentally coincides with the time around which Ito set up his painting studio. The “Face” series is thus a manifestation of the artist unleashing his own origins and further sublimating them into ceramic works.

Misato Shōmura, curator of the Museum of Fine Arts, Gifu (currently Deputy Director and Chief Curator), states as follows with regards to the “Face” series.
“Ito, who had tended to produce work from an external perspective in dealing with social messages and the relationship between things for example, had started to become involved in the inner world of troublesome “living beings” –that is, humans including himself. The artist states that he finds all to much enjoyment in this.”

“The fundamental difference between “Face” that is a work of ceramic and that of sculpture, is that the added process of “firing” brings about an artistic effect that transcends human knowledge. This process of firing, which cannot be controlled 100% by human hands, is extremely important for Ito in creating human beings. ”

In the text contributed to the catalogue for this exhibition, Terunobu Fujimori touches upon the significance of Ito’s treatment of soil in his works.
“Soil absorbs the consciousness of those who handle it, as well as the gaze of those who look at it, like a sponge. People live with their feet firmly treading upon the soil that absorbs their consciousness. One believes that when an artist who works with soil touches it, their self-consciousness is gradually absorbed and disappears, enabling them to arrive at the selfless space of prayer.”

The unique texture of the soil brought out through an uncontrollable process. The world exceeds human knowledge, and human beings are also 100% beyond control of human beings. It can be said that through his work, Ito is trying to express the nature of human existence.

The thread-on-cloth collages are the artist’s latest works that have been created for this exhibition. The stitches are inspired by Senninbari (a belt strip of cloth stitched 1000 times and given as a Shinto amulet by Japanese women to soldiers going away to war), and reflect prayers and messages of anti-war. As the artist himself mentions being “attracted to the highly simplistic shape of a cube,” the motifs depicted include a “house” that is a combination of a square and triangle, as well as the “sun and moon” that has ties to interacting principles of “man” and “woman.” Like drawings made on cloth with thread, the works reflect diverseness of an everyday material that is different from soil.

“Whether it’s a plate or a sculpture with a human face, Ito simply makes what he needs in order to lead his life. In the first place, “doing art” is something that is a part of our daily lives.
People live life, and it is from this that works are born. Ito is only being faithful to this.”

This exhibition allows you to experience fundamental questions such as “what does it mean to live?” and “what does it mean to be human?” –issues that are often forgotten in contemporary life. We invite viewers to embrace this rare opportunity to engage with the world of the artist’s work.

【Exhibition Catalogue】
The catalogue Keiji Ito will be published by Tomio Koyama Gallery in correspondence to the exhibition, and will be available for purchase at the gallery and via website. 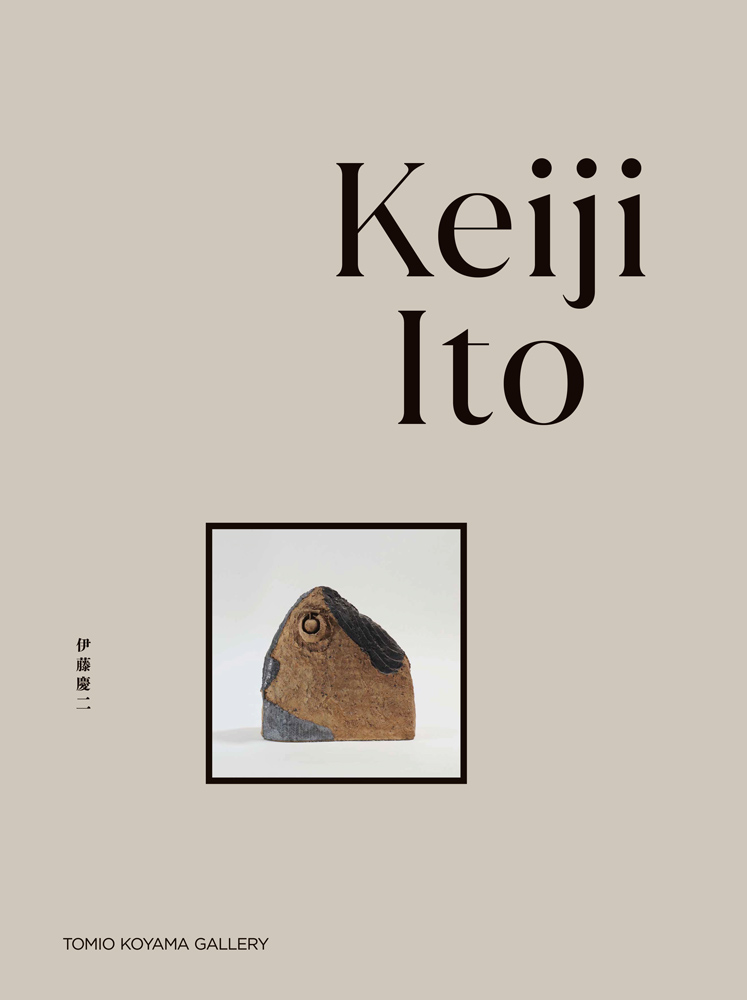